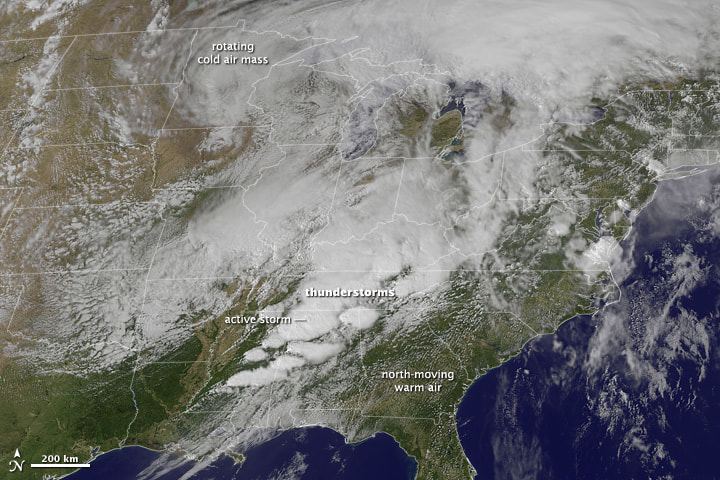 (Click on the picture to take you directly to the source)
The image above was taken on April 27, 2011 by Nasa from the GOES Satellite
​
The 2011 Tornado Outbreak was the worst tornado outbreak ever recorded. It killed many people and left a wave of destruction as it passed through. During the short period of time between April 25th, 2011 and April 28th, 2011, three-hundred and sixty tornadoes affected the Southern, Midwestern, and Northeastern parts of the United States. Alabama and Mississippi were most affected in this natural disasters attack. Four of these tornadoes had been rated the highest destructive rate on the Enhanced Fujita Scale (EF-5). This was surprising to many because even though tornadoes do happen in the United States, they are still infrequent and only happen occasionally with more faint and weak tornadoes. During the outbreak, the most destructive day was April 27th having two-hundred and sixteen of tornadoes out of the total three-hundred and sixty tornadoes. A majority of the tornadoes during these few days were either EF-0 or EF-1, but there was still a significant amount between EF-2 and EF-5 that caused countless damage to people’s homes and lives. Many of the major news groups captured this event and sent out warnings and stayed on tv for a while so that everyone could hopefully stay safe during the outbreak.
Most tornadoes are formed from thunderstorms which means there needs to be warm, moist air, with instability. During this event, a mass of cold air mixed with the moist and warmer mass of air that was coming from the Atlantic and the Gulf of Mexico.